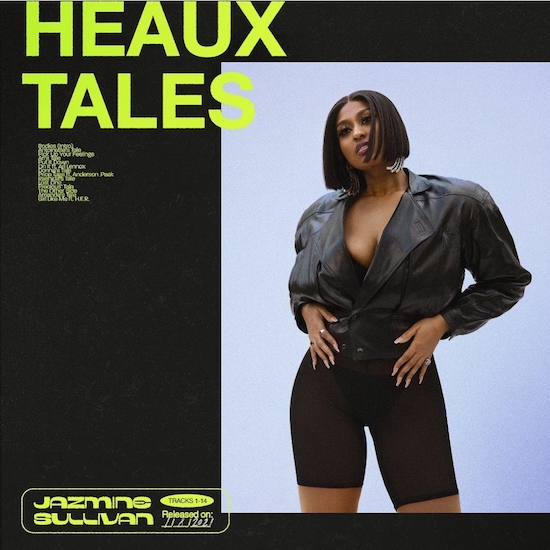 It's been said time and time again, yet it bears repeating: Jazmine Sullivan is one of the best singer-songwriters of her generation. It was proven on her first two albums Fearless and Love Me Back. However, it really solidified back in 2015 when the singer released her third album Reality Show. Filled with jams like "Let It Burn" and "Mascara," the album was so good that we've been rocking with it in the six years since. But now Jazmine has more for us to enjoy with the release of her first EP, a concept project entitled Heaux Tales.

We knew that the EP was going to be something to talk about when she dropped the tearjerker "Lost One" in August. That track serves as the emotional heart of the album, with its acoustic guitar and sparse melody conveying the ache of loving and losing. There are more dimensions featured here, however, as she gets into the different relationship stories that concern the modern woman. That's why she can veer between tales of being d--kmatized on "Put It Down" alongside Ari Lennox, tell a lousy lover to pack up his things on "Pick Up Your Feelings" and team up with Anderson .Paak to discuss the economics of getting some on "Pricetags."

The connective tissue between the tracks are stories told by different women. The tone of them range from the  heartfelt to the raunchy, with the ladies speaking frankly about sex, sexual politics and constraints placed on women who try to take agency over their sexuality. It's the stories that make emotional moments like "The Other Side" and closer "Girl Like Me" feel earned.

Everyone might not connect with the stories that Jazmine Sullivan is offering on Heaux Tales but you can't deny that it's refreshing to have the songstress back doing what she does best.


TAGS:  Anderson Paak, Ari Lennox", audio, jazmine sullivan
Previous: ELHAE Shares A ‘Fun Fact’ With Rick Ross Next: Jazmine Sullivan Pleads The Case For A ‘Girl Like Me’ On ‘The Tonight Show’