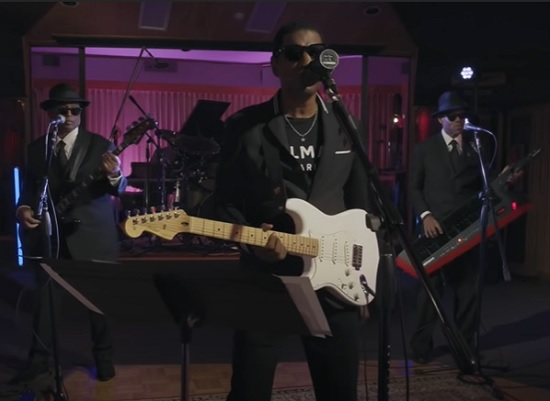 With decades of hits under their belts, one would think that Jimmy Jam & Terry Lewis would have released their debut album years ago. Still, it seems the fellas have been biding their time for the right moment for their own record to come into the world. That time is now and they've made a splash with their Babyface-featuring single "He Don't Know Nothin' Bout It." They also took the time to bring the single to a wider audience with a performance on The Tonight Show Starring Jimmy Fallon.

The trio arranged a remote performance of the track, which sounds like a combination of the best both parties' '90s productions, which made the song the primary focus. It starts with Jam, Lewis and Face dressed in black and swaying to the smooth rhythms of the song. Babyface then began his romantic verse as he sang about a lady who could use a change of man. The simple take on the performance had no fanfare (other than a few choreographed movements) and no digital embellishments. The old-school approach gives the song's writing and production the shine it deserves and proves that this group of sexagenarians hasn't lost a step when it comes to crafting hits.

The debut album from Jimmy Jam & Terry Lewis still lacks an official title and solid release date. We have a feeling now that 2021 is here, that fact will change very soon. While we're on the lookout for any information that we can get our hands on, you can press play below to get a dose of the fellows doing their thing below.