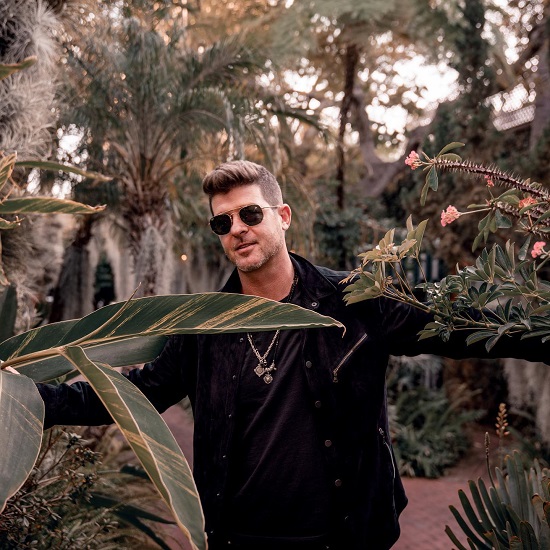 We've been through a lot this year, and we're only two weeks in. We're all hoping that a change will come sooner rather than later, especially after a year that was hard on everybody. Singer-songwriter Robin Thicke is among the hopeful and he's expressed such in previous singles from his upcoming album On Earth, and in Heaven. He further makes his case for hoping for a better world with the release of his newest single "Beautiful."

Robin once again reaches into his old-school soul bag for the occasion, channeling the sound of doo wop and Motown with intricate horn arrangements, strings and even a little organ. However, the sentiment of the song is all Robin as he lists the world's ills and what he thinks might be the solution. "Sometimes life's too much for me to take / Sometimes, my heart only wants to ache," he sings on the chorus. "I look in your eyes, your smile reminds me what love's about / Let's tear it down, down, down, all the way down / Make something beautiful." Though we're sure that this song was written prior to all that's gone down in the past few weeks, its sentiment is right on time with the transition we're all hoping to make in the next few months.

Robin Thicke has always known how to craft a feel-good song that throws in just enough romance to make it universal. It's safe to say that "Beautiful" once again shows off that ability. Check out the song and its lyric video when you press play below.


TAGS:  audio, robin thicke
Previous: Sam Dew & KIRBY Are So ‘GONE’ Next: SoulBounce Exclusive: Dondria Learns A Lesson In Love On ‘Let It Be’