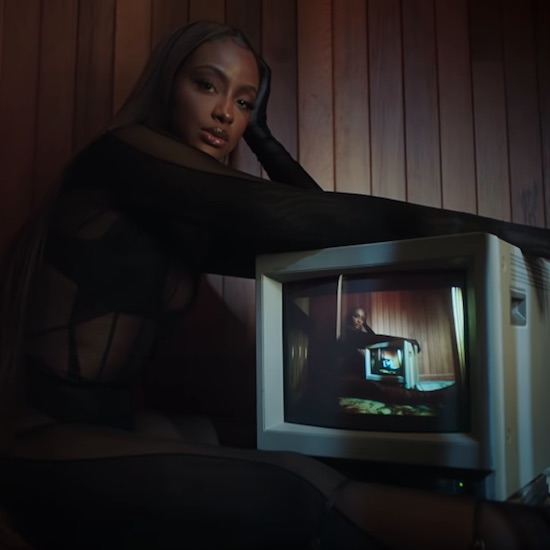 If you follow Justine Skye on social media, then you've probably noticed that there's a new man in her life. That man is none other than Timbaland – who she's hoping is the man that can take her career to the next level. For much of 2020, the songstress was in the studio with Timbo and would provide sneak peeks and previews here and there to whet her fans' appetites. Now Justine is ready to quench their thirst with the release of one of these highly-anticipated Timbaland productions with her new single "Intruded" and its music video.

"Intruded" starts with Justine singing in a cadence similar to Ginuwine on "So Anxious," giving a wink and a nod to Timbaland's previous production work. Here, Tim laces her with a sound bed of guitar, bass, synths and stuttering whistles for her tale of how she's got still got an ex sprung. "Got him coming right back for all this loving /
You can't walk away ‘cause it's so damn good," she sings on the chorus about her sexual superpowers over old boy. He's not the only one whipped, though, as Skye admits later in the song, "You're the only man I'd chase."

Justine enlisted director Nina Holmgren for the futuristic visual for "Intruded." Before we get into the single, though, a snippet of another song plays while we see Skye laid out on the floor surrounded by old computer equipment while Timbaland appears on grainy security camera footage. The track switches up to "Intruded" and our leading lady is surrounded by cameras, monitors and wires as she sits perched on a rotating disc. Appearing on the monitors are a couple of her famous friends – model Bella Hadid and rapper Lil Yachty – posing and mugging for the cameras respectively. Justine serves up some smoldering looks that even set her fingernails on fire and start melting some items in the room. Toward the end of the clip, the music drops out and the scene changes to Justine walking up to a car, popping the trunk and then hopping in for a little joyride to the strains of her singing a flip of Aaliyah's "If Your Girl Only Knew." It all makes for quite an engrossing watch.

With a trendsetter like Timbaland behind the boards and his stunning track record of hits, we expected a little more from this Justine Skye collabo. "Intruded" isn't a bad song per se, it's just safe – missing that spark of his past work that makes you want to up jump da boogie even to a slow jam. Though this song didn't snatch our wigs, we have our fingers crossed that they have some heat on the way on Justine's upcoming album Space & Time produced entirely by Timbaland.