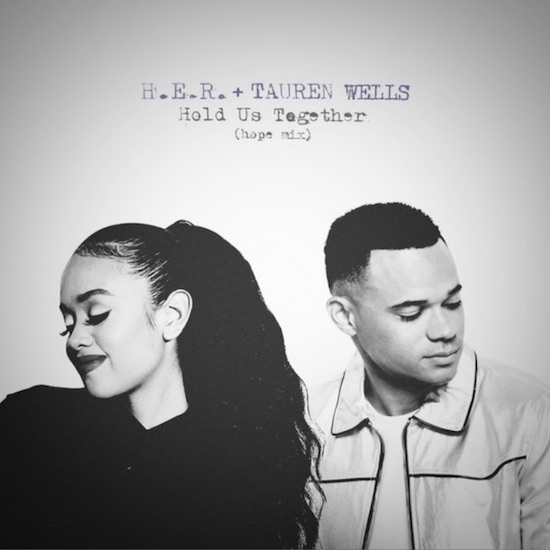 H.E.R. caught us off guard with the uplifting ballad “Hold Us Together” for the Disney+ film Safety soundtrack. After listening to it, we knew it wouldn’t be the last time we heard her on an inspirational anthem – we just didn’t think it would be on a remix. H.E.R. has given the song new life by adding vocals from multi-GRAMMY-nominated Christian singer Tauren Wells. The two acclaimed artists unite their talents on “Hold Us Together (Hope Mix)” to create an empowering duet.

While the "Hope Mix" doesn’t change the lyrics or production, Tauren’s addition to the track is more than just for show. Making the track a duet makes sense, as it’s about finding strength to carry on with someone you see as a confidant. It doesn’t hurt that Tauren’s voice is a great complement to H.E.R.’s own tenor. Together, they do more than just hold it together, but take things to a whole new level.

Speaking of reaching a new level, H.E.R.'s star continues to rise after recently winning two GRAMMY Awards this year for the songs, “I Can’t Breathe” and “Better Than I Imagined” with Robert Glasper. Before, her patented shades were seemingly just a gimmick. Now, with her future so bright, well, you know the rest.


TAGS:  audio, H.E.R., robert glasper, tauren wells
Previous: ROE Is Trying To Be Your ‘Baby’ Next: Chloe x Halle Do Their Home State Proud With ‘Georgia On My Mind’