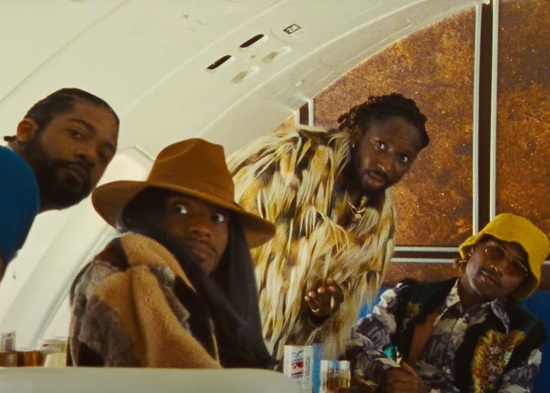 Patrick Paige II is ready to take us on a funky new journey. The artist, best known as the bass player for The Internet, is readying his sophomore album If I Fail, Are We Still Cool? for release this May. While that's enough reason to be excited, he's also got us open for his mega collaboration "Whisper (Want My Luv)," which features Durand Bernarr, Allen Love and bandmate Steve Lacy, and its '70s-inspired video.

The track finds the fellas pitching woo by flipping between vocals and rhymes as they make their intentions known over a tight bass line and dreamy synths. The track sounds and feels like a modern-day Bootsy Collins outtake as each guy states his case as to why the lady they're courting wants their love.

They elevate the song even more by taking things to the friendly skies for the video. The guys don '70s-era garb that will definitely put you in the mind of a blaxploitation film (especially Durand's silky Superfly wig). They're all smitten by a flight attendant who's got all the right curves and knows exactly what they want. As they each kick their game, she takes it all in before making her pick of the four. Before we can know ultimately what happens (other than a damn good time), the video switches up things and we're given a taste of a futuristic new track that lets Patrick show of his rap skills even further as he trades verses with Syd against a backdrop that feels distinctly '90s.

With all this going on, it feels like If I Fail Are We Still Cool? will be another notch in the bassist's belt. Get into the latest from Patrick Paige II when you press play below and look for his new album to arrive on May 21st.