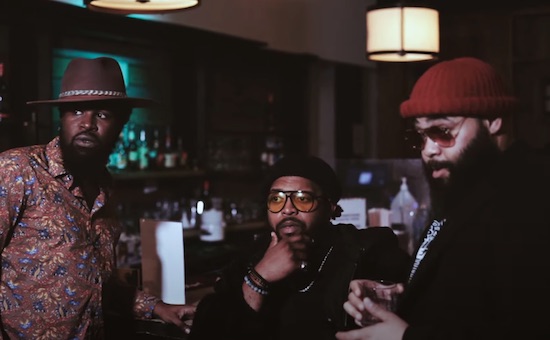 The Hamiltones, who have been known to sing the beard off a billy goat, continue to step out of the shadows of the background into the limelight as lead singers in their own right. The GRAMMY-nominated soul brothas have made major strides in the past two years, releasing a trio of EPs – Watch The Ton3s, The B Side and 1964 – and a holiday project, A Hamiltones Christmas. But J. Vito, Tony Lelo and 2E were just warming up, and now the group is turning up the heat on their new single “Manager.”

Produced by Gavin Maestro, “Manager” is a funky, bass-heavy slow jam where the fellas talk a good game about a chick who's caught their eye. They compare her to famous women like Jada Pinkett-Smith, Issa Rae, Tracey Ellis Ross and Regina King, name-checking sitcoms they've all starred in. The Hamiltones make her an offer she can't refuse, crooning on the chorus, "Let me be your manager / Girl, you're a superstar," to the lucky leading lady.

The video for “Manager” keeps things simple and straight to the point. Vito, Lelo and 2E watch beautiful women walk into a lounge and they spring into action, spitting their game and serenading them. While not much happens, The Hamiltones' personalities and vocals do more than enough heavy lifting to keep you entertained.

“Manager” is the first single from The Hamiltones’ upcoming, as-yet-untitled new project, expected to drop sometime this spring.