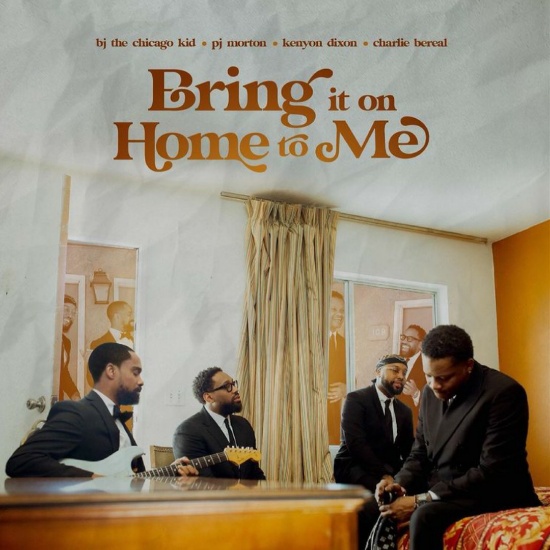 A talented quartet comprised of BJ The Chicago Kid, PJ Morton, Kenyon Dixon and Charlie Bereal have joined forces to pay homage to the one and only Sam Cooke with a cover of his classic “Bring It On Home To Me.” Sam Cooke’s music has been an inspiration to men, women and children for countless years, and because of the film One Night In Miami, we got to see a glimpse of the man behind the music, thanks to director Regina King and Leslie Odom, Jr.‘s powerful portrayal of the legend. Inspired by Odom’s Oscar-nominated performance, the fellas have given a faithful cover that feels timeless.

Morton shared with Entertainment Tonight, "It happened really quickly and organically, actually. BJ asked me to come to the studio to record this duet of Sam Cooke's 'Bring It On Home To Me' for a project he was working on. After listening, we both felt a third harmony could be nice. We both had the same idea that Kenyon Dixon would fit perfectly. Right after that, the news about Leslie Odom Jr.'s Oscar nomination for his performance as Sam Cooke in One Night In Miami came out. So I hit BJ and asked him what he thought about us just putting it out now, paying homage to Sam Cooke, of course, but also to show to Leslie and the movie some love because we all loved it."

Against Charlie Bereal’s acoustic guitar licks and the occasional finger snaps, PJ, BJ and Kenyon bless us with a stripped-down, pure and simple version of the Cooke tune, but it’s anything but basic. The three singers deliver soulful harmonies that feel straight outta someone’s Baptist church and as classic as the original recording.

Along with the track, the foursome also filmed a music video inspired the film. At the motel like the one in the movie, the four musicians, dressed in black Civil Rights-era suits, sit in a hotel room performing the track. The door is wide open because the funk coming from Charlie Bereal’s guitar is too much for them. Like the cover, the video is sparse, but doesn’t lack heart or personality.

Although Leslie Odom, Jr. didn’t take home the Academy Award for Best Supporting Actor or Best Original Song for “Speak Now” at this year’s Oscars, he becomes the first man and only the fourth performer to be nominated for acting and songwriting in a single year, following Mary J. Blige, Lady Gaga and Cynthia Erivo. We expect many more award nominations in Odom’s future, and suspect that this stunning cover of “Bring It On Home To Me” by BJ The Chicago Kid, PJ Morton, Kenyon Dixon and Charlie Bereal will garner a few nominations, too.