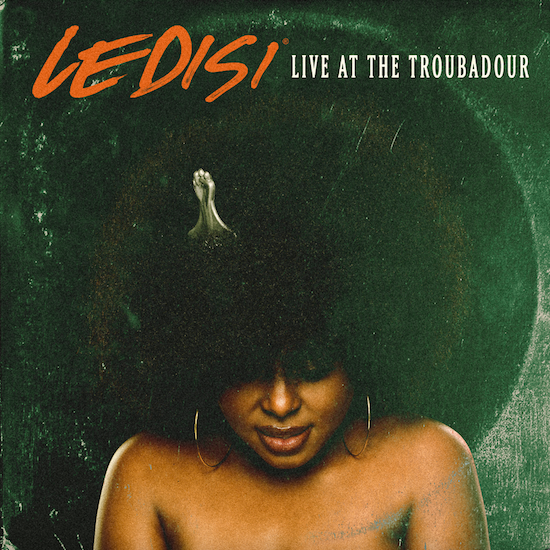 COVID-19 may have turned 2020 upside down and ground the music industry to all but a halt, but Ledisi did not let the global pandemic stop her show. In the midst of the madness, she released the single "Anything For You" last April and her tenth album The Wild Card a few months later in August, and her gamble paid off. "Anything For You" went on to win Ledisi her long-overdue first GRAMMY for Best Traditional R&B Performance at this year's GRAMMY Awards. Riding high from that victory, Ledisi is striking while the iron is hot and has released her second project in less than a year with her first live album on her independent label, Ledisi Live At The Troubadour.

Recorded this past December at the iconic Los Angeles venue Troubadour Theater and originally broadcast as a virtual concert, Ledisi Live At The Troubadour features a total of 11 songs – 9 live tracks and 2 new bonus cuts. The live album spans her career with an emphasis on cuts from The Wild Card, including "WKND," which kicks off the concert; "One"; "Same Love," which is sandwiched between "All The Way" and "In The Morning" in the "Ballad Medley" and "Anything For You," of course. Fan favorites "Alright," "Pieces Of Me" and "I Blame You" are included and will have you singing at the top of your lungs along with Led, who sounds her usual amazing.

In addition to providing us with a front-row seat to her live concert experience with Ledisi Live At The Troubadour, the bonus cuts are an added aural treat. "Nothing But You," written by Ledisi and frequent collaborators Jarius Mozee and Rex Rideout, finds her letting her man know that she doesn't want anyone else's love but his over a twangy guitar and live drums. On "Stone," she's joined by Deva Mahal, and they turn The Wild Card track into a soulful duet.

While we wait for concerts and live music to return to our lives, Ledisi Live At The Troubadour feeds our needs. The album brings Ledisi live and direct to us until we can see her on stage once again, and, with "Nothing But You," gives us a song that might just snag her another GRAMMY.