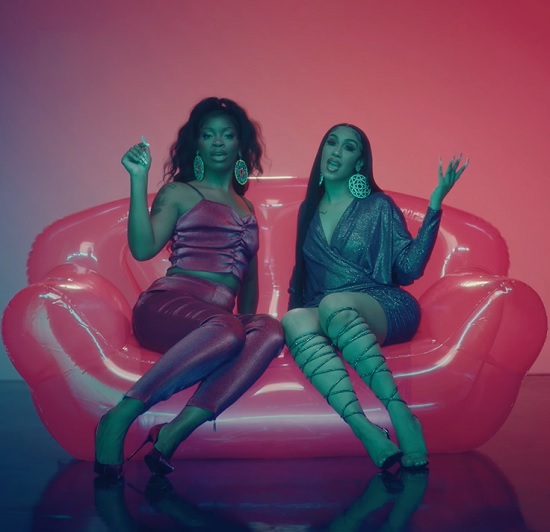 Queen Naija and Ari Lennox got tongues wagging when they dropped their duet "Set Him Up." But that was because the gossip folks hadn't bothered to listen to the track and instead went the faux outrage route. If they had, they would have learned that the song is really just a grown-up version of "The Boy Is Mine," only this time the ladies in question have the agency to do something about it. To get the full extent of their plans, though, you have to check out their video for the track.

Neon-colored and lit, the clip begins with the ladies having a gab about what they think about their individual men over the phone. As each starts giving detail after detail, though, they start to realize that they’re sharing him like the president (word to Missy Elliott). Rather than go at each other like young Brandy and Monica in 1998, they plot on their man's demise. However, unlike the simple situation of busting him that they describe in the song, the video shows him tied to a bed with duct tape over his mouth. The ladies laugh it up while he watches in bewildered fashion anticipating what he might do. Before that comes to fruition, though, the Val Vega-directed clip fades to black.

"Set Him Up" is one of the four previously unreleased tracks that will appear on misunderstood...still, the deluxe edition of Queen Naija's debut, when it drops this Friday (April 16th). However, you can check out the scheming adventures of Queen Naija and Ari Lennox right now when you press play.


TAGS:  Ari Lennox", Queen Naija, Val Vega
Previous: Dawn Richard Takes Us From Past To Future On ‘Mornin | Streetlights’ Next: Anushka Beckons Us All To Be ‘Brave’