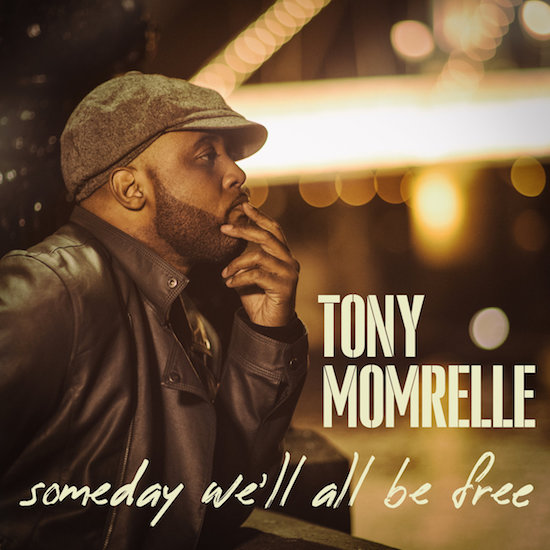 He's been called a "21st century Stevie Wonder," but Tony Momrelle channels the spirit of and pays homage to another legendary artist with his latest release. It should come as no surprise that that legend is Donny Hathaway, an artist whose voice Momrelle's vocals have often been likened to, and the song is a cover of his classic "Someday We'll All Be Free," a song that is as relevant today as it was when it was released in 1973.

For his remake of "Someday We'll All Be Free," Tony stays true to the original, but his rendition is no mere impression of Hathaway. He provides an impassioned vocal performance that gives us shades of Donny but is a brilliant showcase of his own soulful vocals that we've come to know and love via his work with Incognito and Reel People and his solo releases. Perhaps the biggest difference between the two tracks is the sound bed of Tony's cover, which consists simply of acoustic guitar and strings. The acoustic backdrop serves Momrelle well and actually helps to amplify the song's powerful lyrics.

Tony Momrelle's version of "Someday We'll All Be Free" will be included on his soon-to-be-released EP Lockdown Acoustic Sessions. The EP features the previously released single "Escape" and will be released on Friday, April 30th. Until then, listen to the audio and watch the companion music video for Tony Momrelle's "Someday We'll All Be Free" right here, and download or save the song from your favorite digital music provider.


TAGS:  audio, donny hathaway, tony momrelle
Previous: Sinead Harnett Bares Her Heart On ‘Hard 4 Me 2 Love You’ Next: Dawn Richard Takes Us From Past To Future On ‘Mornin | Streetlights’