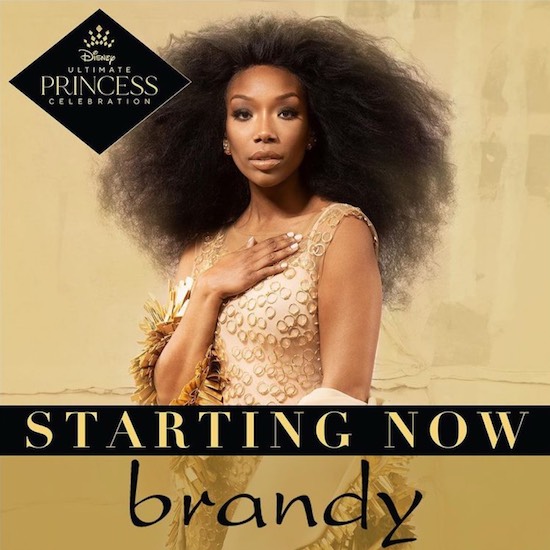 Brandy has filled many roles over the years: actress, singer, reality show star, mother and daughter. One of her most groundbreaking roles, however, is her distinction as the first Black Disney Princess. She starred opposite her idol Whitney Houston in the 1997 made-for-TV musical, Rodgers & Hammerstein's Cinderella. Although there were a number of memorable songs performed during the musical, no soundtrack was ever released for the project, much to fans' dismay. A missed opportunity at the time, Brandy is now getting her chance to amaze, astound and inspire a generation of Disney fans with the new single “Starting Now,” as part of Disney's Ultimate Princess Celebration.

“Starting Now” is an empowering anthem about embracing your own inner strength, and the Vocal Bible handles the vocals like light work. The production has the hallmarks of your usual big Disney pop songs but with an Afro-Caribbean techno twist courtesy of producer Oak Felder, now known as Oakestra. While the song is a definitely a pop bop, it’s filled with inspiring lyrics throughout. “Starting now there's no room left for wondering / Got a new vision of yourself / And she's who you wanna be starting now,” Brandy sings to encourage princesses of all ages.

In addition to the new single, a dynamic lyric video for "Starting Now" has surfaced as well. The clip contains footage from numerous Disney live-action and animated films over the years, starting with Brandy as Cinderella, of course. We also get to see a pantheon of princesses including Mulan, Pocahontas, Elsa, Jasmine, Snow White and many more.

Disney’s Ultimate Princess Celebration is a global, year-long event aimed at highlighting the impact of Disney princesses and the courage and kindness they inspire in fans all around the world. It will include special events, experiences, unique products and performances. Brandy has kicked things off with a bang, and we’ll be on the lookout for more songs from our faves.


TAGS:  audio, brandy, oak felder, oakestra
Previous: Gwen Bunn & Faith Evans Get Photoshoot Fresh In ‘Between The Lines’ Next: Shakka & GoldLink Take Us To An African Paradise In ‘Solo’