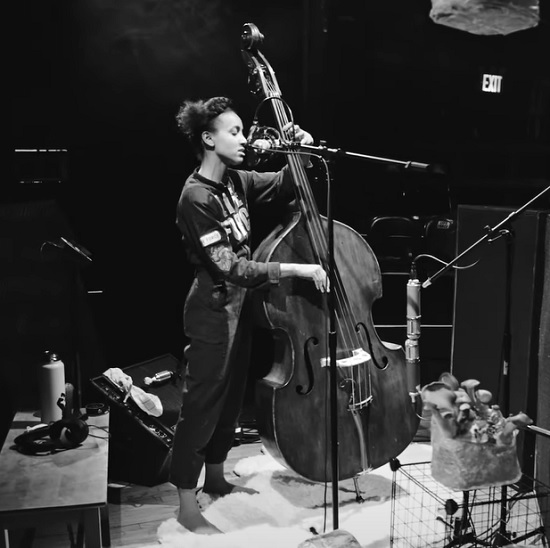 Esperanza Spalding has shirked the traditional idea of an "album release" for quite some time, often opting for unconventional methods of getting music to adoring fans. She's also taken a very experimental approach to her craft. So it should really come as no surprise that the singer has a new album set for release next month. Songwrights Apothecary Lab will contain a collection of songs (which she is calling "formwelas" for the project) recorded as part of her songwriting workshop of the same name hosted at different locations across the country. She offers up another formwela with the set's latest release "Formwela 10."

"Formwela 10" deals with our sense of romantic entitlement that we can have and the potentially devastating effects it can cause. She leads the song with just her trusted upright bass as her lovely voice paints a picture of the song's premise. "I saw what I wanted and took it for me / Without the strings attached like they’re supposed to be," she sings honestly. "I didn’t know how deep some feelings can go / And you can really do some damage down there in the soul of another." Soon, a new melody is injected into the song with guitar, piano and brushed snares coming into the frame as she digs deeper into the cause and effect of her actions, singing, "It’s not to absolve responsibility / And there’s no going back the scar is here to see / I know well I put you through a living hell / This is a way to make the damages clear so I won’t do another that way."

The sentiment is an incredibly mature one that is refreshing and beautiful in a time when callousness is far more common. Its beauty is also captured in the song's video, which simply captures the song's recording and shows the creative and skilled effort that was poured into its making.

Songwrights Apothecary Lab will arrive on September 24th via Concord Records. Listen to "Formwela 10" and watch its video below. For more info on the album — including each "formwelas" intended effect, the process of making it and links to pre-order the album — head to the project's immersive website.