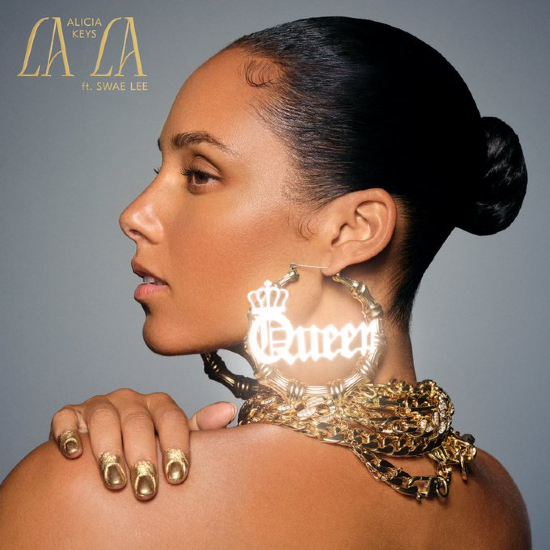 Alicia Keys has hooked up with Swae Lee and producer Mike WILL Made-It for the new single “LALA (Unlocked)." She puts away her empowerment anthems to deliver a steamy track that’s making us feel some kind of way.

“LALA (Unlocked)” mixes metaphors to describe the indescribable feeling of being both in love and in lust with someone. There's the getting high off of love and then having the fear of what happens when that high is gone. “Light the incense (Incense) / Not to mention (Mention) / Skin like whiskey (Whiskey) / She's cold like on the rocks,” Swae muses on the chorus. Alicia keeps that same energy, singing, "Light the incense, lose the tension / Feel like heaven / Lust mixed with a vodka / (La, la-la, la, la-la, la, la) / Feelings get lost in the lala." The duo glides effortlessly over Mike WILL’s throwback groove that sounds straight outta the '70s (thanks to a healthy sample of Tyrone Davis’ “In The Mood”) and a bottle of brown liquor.

Along with the new track, Keys shared a visualizer for "LALA (Unlocked)." It’s simply a loop of Alicia giving us a sexy glance over her shoulder, her eyes flashing gold for just a split second. Over on Instagram, she shared a short clip of her seated at a table in a restaurant next to Swae, Mike WILL and her husband Swizz Beatz with the caption, "Queen of Kings!" Everyone is dressed up and glaring into the camera before the scene switches to them all smiling and raising their champagne glasses to toast. It's unclear if this is a sneak peek at the official music video or just a gathering of friends toasting to a song well done, but we're sure we'll find out soon enough.

While we ponder that, Alicia Keys is scheduled to perform "LALA (Unlocked)" on MTV’s Video Music Awards on Sunday, September 12th, returning to the show for the first time in seven years. We'll definitely be tuned in to see if she flips any more keyboards.


TAGS:  alicia keys, audio, Mike WiLL Made It, Swae Lee, swizz beatz, Tyrone Davis
Previous: Ari Lennox Returns To Apply Some Old-School ‘Pressure’ Next: Chaka Khan Brings Soul To The ‘Everybody’s Talking About Jamie’ Soundtrack With ‘When The Time Comes’