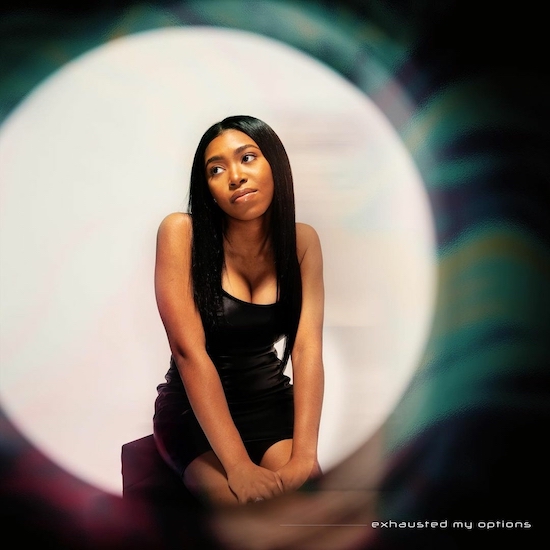 At just 23 years old, Jayla Darden has already proven her talents as a singer, songwriter, producer and engineer, making her an all-around threat. The up-and-coming artist may not be a household name yet, but she's looking to change that with her newest single, “Exhausted My Options,” produced by Soulection veterans ESTA. and Sango.

Jayla's vocals on “Exhausted My Options” are reminiscent of both Brandy and Kehlani. However, it's her lyricism that really captures your attention. Honest, forthcoming and real, Darden opens up about giving people more chances than they deserve and reaching a breaking point in her relationship. When asked whether or not this record was inspired by personal experiences, she responded, “indeed. every line (sadly).” That transparency is what makes you appreciate the song even more. As Jayla sings, “They all said that he’d be a problem / And I tried to love it up out him / And that was my first mistake cause I know / Only you could fix it, babe, but you won’t," she comes from a place of good intentions. But we all know that love alone can’t change someone who doesn’t want to be changed.

The “Exhausted My Options” visualizer is a simple montage of clips of Jayla filmed with grainy and kaleidoscope filters. In the first few seconds, we are given a glimpse of the woman responsible for the song who appears to be soft, tomboyish and down-to-earth. Later, Darden is spotted wearing a white sweatsuit and crop top, giving us Aaliyah vibes. The rather chill video is accompanied by the lyrics for the moody melody.

This is the first new music Jayla Darden has released in 2021, but hopefully, she will drop some more gems this year. While we cross our fingers, check her out on Instagram and Twitter and grab "Exhausted My Options" from a number of digital music services.


TAGS:  audio, esta, jayla darden, Sango, Soulection
Previous: Hitmaka Links Up With Queen Naija & Ty Dolla $ign For A ‘Quickie’ Next: Sevyn Streeter & Jeremih Show Us What Their ‘Wet Dreamz’ Are Made Of