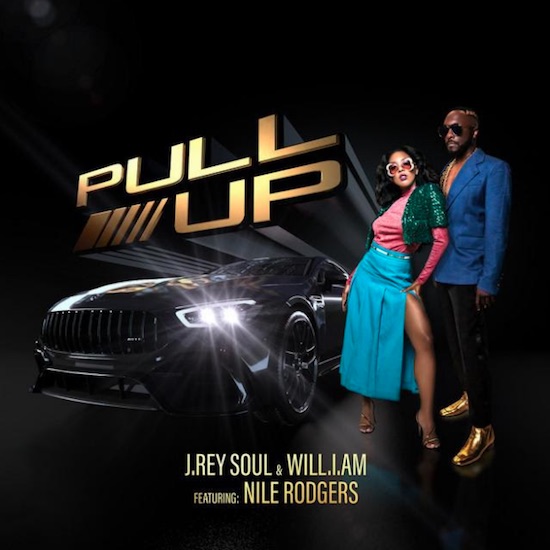 J. Rey Soul, the newest addition to the Black Eyed Peas family, slides into the driver's seat for her debut single "Pull Up" featuring BEP frontman will.i.am and the legendary Nile Rodgers. The successor to Fergie (and Kim Hill before her), J. Rey Soul is in the fast lane to stardom (she's currently up for two 2021 Billboard Latin Music Awards for her feature on the Peas and Ozuna hit "MAMACITA") and puts the pedal to the metal on "Pull Up," a funky, futuristic romp. With lyrics like, “We D-R-I-V-I-N-G / Yeah, we be zooming down them streets / Baby, go top speed like you Lewis Hamilton / Make me feel ecstasy,” this is a song tailor-made for a nighttime joyride down a popular strip fasho.

The accompanying music video matches the feel of the single with the perfect blend of '70s and '80s homages, while still retaining a futuristic feel. At the very beginning of the visual, a black screen appears with a message from J. Rey about the clip, with her calling it, “A juxtaposition of inspiration,” and shouting out a few of the legends where she found that inspiration, running the gamut from Earth, Wind & Fire to Daft Punk.

Soul's style and fashions give Donna Summer meets Pam Grier's Foxy Brown, alternating her looks throughout the video. She puts her best chest forward in a revealing black gown, is an afro-glam passenger to will.i.am’s GTA character look and rocks a sweater-skirt combo straight out of a Rat Pack flick.

The Tron and disco references, complemented by the animation and brilliant color scheme of the video are not unlike backdrops for other dance music releases, but this visual seems to be very aware of its own deliberate cheesiness, which makes it endearing and a smart nod to eras before.

Although the phrase "Pull Up" is a more recent slang term, J. Rey Soul and company knew what they wanted this release to represent: past meets future. Mission accomplished.