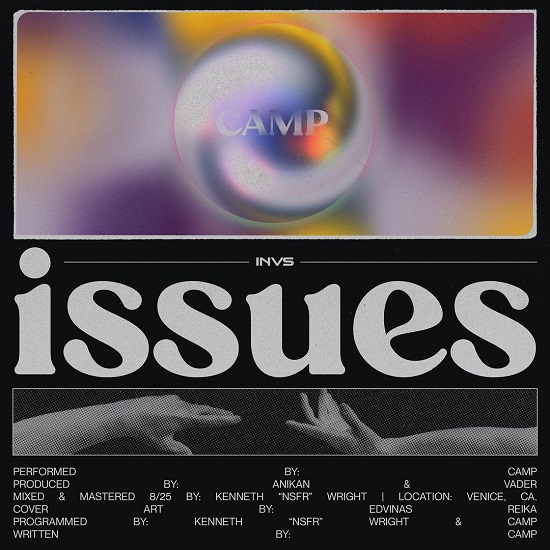 It's been quite some time since we got some new new from Aaron Camper. Back at the beginning of 2018, he dropped his dope album Hi-DEF, and we last heard from him back in 2019 with his single "D.O.L." The artist is now back on the block, though he's now changed his artistic moniker to CAMP in an effort to reinvent himself. The new name also comes with new music, with the singer-songwriter dropping his single "Issues."

"Issues" finds CAMP addressing a lover who's been gaslighting him about the problems in their relationship. Producers Anikan & Vader provide the track with a bouncy synth melody slightly reminiscent of the repetitive music you'd hear on a carousel, perhaps to express the repetition of the toxic behavior CAMP has to deal with. Meanwhile, the singer gets straight to the point as he immediately begins with the chorus. "We just can't agree on our issues / Not at all / Honestly, if I lose you to these issues / I won't miss you / Not all," he sings. He further delves into the topic in the verse, speaking on the issues that he's had to deal with throughout the troubled love affair. His directness results in a song that just misses the two-minute mark, creating an anticipation that there is more coming from the artist in the near future.

Whatever name he chooses to go by, it's quite clear that CAMP will always be worth a listen when he arrives on the scene. Delve into his short and engaging "Issues" when you press play.


TAGS:  aaron camper, Anikan & Vader, audio, CAMP
Previous: Pink Sweat$ & LG Team Up To Make You ‘Feel Good’ Next: The Shindellas Look Good In The Midst Of ‘Feeling The Pain’