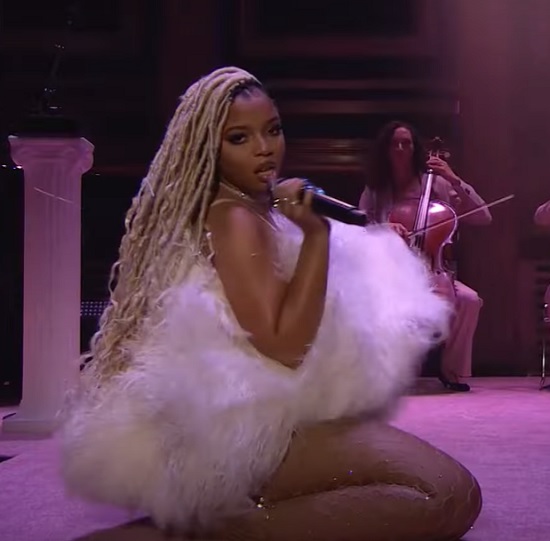 When it comes to live performances, it seems that Chlöe is a fan of the maximalism approach. The singer proved that when she performed her debut single "Have Mercy" on the MTV Video Music Awards and left it all on the stage. She continues this trend by kicking the track for the late-night audience on The Tonight Show Starring Jimmy Fallon.

Like the VMAs, she starts with a bit of classical flair with what she calls "The Big Booty Sonata" (which is really just the song with orchestral strings and piano). She then heads to the MPC to remix the track live after stripping off her skirt before heading straight into an abbreviated version of the single that includes all the aforementioned elements. She works herself into a frenzy before the big finish, where she punctuates the performance with a flourish before letting us know that we'd "better f**kin' pay attention." Well alright then, Miss Chlöe!

It seems that the singer is trying to be every woman as she prepares to bring us her first solo offering. While we're loving her bold and unrelenting attitude, we also look forward to seeing what a more focused effort from Chlöe will look like, too. We're sure it'll be just as entertaining.


TAGS:  Chloe, Chloe Bailey, The Tonight Show Starring Jimmy Fallon
Previous: DMV Bouncers: Vine Of The Rhyme Pours It Up For 30 Years Of A Tribe Called Quest’s ‘The Low End Theory’ Next: BeMyFiasco Takes Us Home To Deal With Her ‘Bad Dream’