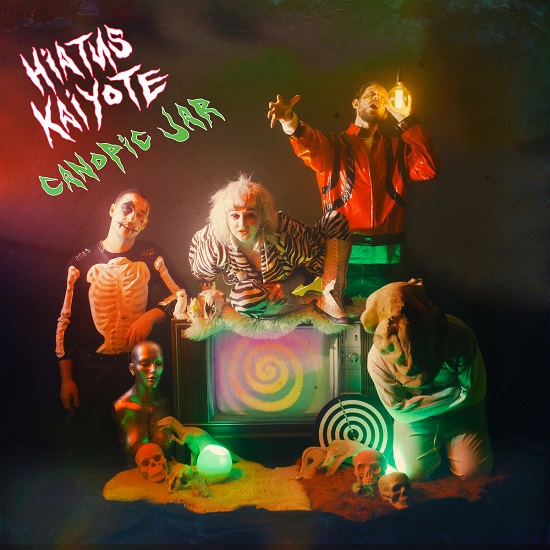 Hiatus Kaiyote already came bearing musical gifts when they dropped their latest album Mood Valiant this summer. The quartet doesn't seem to be done, though. Instead, they're celebrating the arrival of spooky season with "Canopic Jar," a tune meant to bring some soul to your Halloween playlists.

The tune's creepy sound is solidified from the song's opening, titled "Journey To The Crystal Tomb," which segues into a groove that goes bump in the night. Throw in a little organ, jangly guitar and distorted vocals and you've got the perfect monster mash of sounds. It's not just about that, though, as Nai Palm also brings the esoteric lyrics she's known for which she's known. "Triumph is a blaze, ricocheted / Through the age, through the age, old age, oh, blaze / Oh, oh, oh, oh, oh / When your mind is cast iron, thread in the dark," she cryptically sings. "Hold your tongue in your mouth, I'll hide his shard / And we're lost, digging my own grave."

"A canopic jar is an ancient artefact from Egypt," Nai explained via press release. "When they preserved the body through mummification for the afterlife, the organs were contained in a canopic jar. I used this image of preserving something in this lifetime to be accessed in another as a metaphor for an unobtainable relationship, to re-appear throughout the ages because circumstances won’t allow it this time around."

Will this song be the one to make the Halloween song as much a staple as the Christmas album? Probably not. But it's still a fun track nonetheless. Let Hiatus Kaiyote get you in the holiday "spirit" (get it?!) when you press play.


TAGS:  audio, Hiatus Kaiyote
Previous: SoulBounce Exclusive: Navasha Daya Stands Tall In ‘The Liberation Song’ Visual Next: Adele Prepares Us For ’30’ With The Release Of ‘Easy On Me’