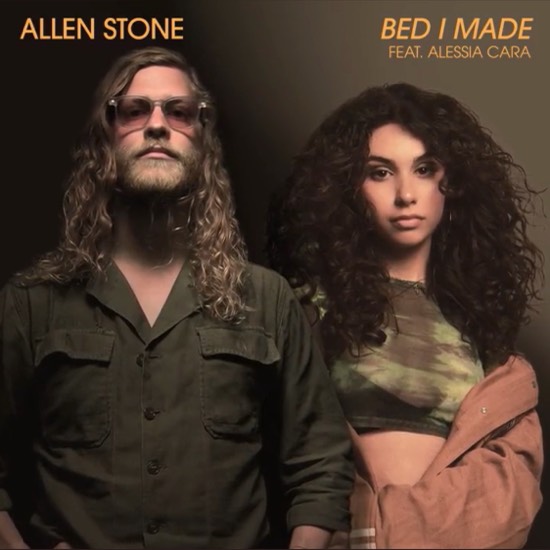 Soulful music with meaning. Is that too much to ask for?

Well, Allen Stone campaigns to bring just that on the revised version of one of his staple songs, the bonus cut “Bed I Made” from 2015's Radius, from his recently released album, APART. Featuring fellow champion for music with a message, Alessia Cara – who covered his song on YouTube eight years ago while making a name for herself – this single version is a vocalizing testimony, taking us to secular church for exactly three minutes.

The surprisingly upbeat acoustic backdrop, consisting of a few consistent guitar licks orchestrated by main producer Ryan Hadlock, exists solely to allow the blending of Stone and Cara’s voices, as they ascend from throaty, mellow trade-offs to full, belting harmonies. The control displayed by both singers as they ebb and flow with one another is the definition of professional, commanding attention.

The contrast of the grooviness of the acoustic guitar with the sobering message of the song works to keep this more of a moment of honesty than sadness. Singing their hearts out about living and accepting the consequences of choices made in life and love, Stone and Cara’s words are the kind of reality-checking self-talk that life coaches would cheer on. Lyrics like, “One million times inside of my mind / Well, I have justified / Baby, but all my problems still follow me / Well, I discovered a way / To cleverly avoid the blame / But all my problems just follow me,” highlight the emphasis on accountability.

With sentiments shared that not even sleep, nor Allen’s “plane over the stars” or Alessia’s flight “to the moon” can provide enough escapism to help them avoid facing their outcomes, this refix of “Bed I Made” hits like a warm cup of coffee in the morning while delivering a cold splash of water on the face.


TAGS:  Alessia Cara, Allen Stone, audio, Ryan Hadlock
Previous: Dylan Sinclair Reveals His ‘Regrets’ Next: The Womack Sisters Warn Not To Get On Their Bad Side With ‘Blocked’