“They’re All Gonna Laugh at You!” 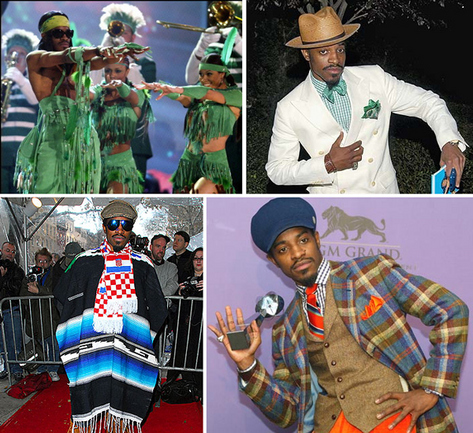 We're all for individuality here at SoulBounce, which is why we support the artists we write about everyday. But when we hear that someone this original threatens to unleash his fashion prowess upon the entire world at large, we can't help but ask: Would you buy?

OutKast's André Benjamin, aka Andre 3000, is taking on the rag trade. The dapper pop star, known for his flamboyant jockey-meets-English gentleman style, revealed he will launch a men's wear line this spring, with plans to soon add a women's line. A heritage site in Italy might be the location for his first show. "It will be based on vintage classics with modern twists," said Benjamin of the collection, adding a denim line made from Japanese salvage fabrics is also in the works.

When the neighborhood cats starting embracing pink Polos and jeans that weren't ten sizes too big, I considered it a step in the right direction. I think Sir Benjamin is a dapper fellow, but I'm not exactly sure if the same dudes that were rockin' to "Two Dope Boys in A Cadillac" and "Southernplayalisticadillacmuzik" are going to be rushing to the stores to look like Mr. Peanut on acid. But anything is possible, I suppose.