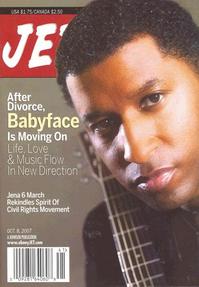 This week Babyface can be seen on the cover of JET Magazine. Black America's news and entertainment digest chats with Face about life after his divorce and his new CD, Playlist. Keeping with the divorce theme, he'll also be on Oprah today discussing the break-up and how the family dealt with it. Set your DVR's because he'll be performing his new single, "Not Going Anywhere," which is dedicated to his two sons, Brandon and Dylan. OK, you may want to have the Kleenex on standby.

In other Babyface news, a song surfaced online yesterday that has him on the hook and backing vocals, but that's not why we're scratching our heads. The fact that it's a Lil Wayne song is what has us perplexed. Yes, Face has gotten sucked into the Weezy vortex. The song "Complicated" is produced by Kanye West and there's no word on if this is a new track off of Wayne's upcoming CD or what, but we're afraid, very afraid.