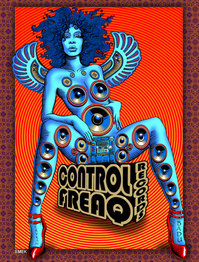 Erykah Badu, reigning queen of SoulBounce, recently chatted with the good folks over at SOHH about her forthcoming Kahba, or is it Kabbah or The Kabbah? And like, what does it mean, Stimpy?!

"It has multiple meanings. You know how you come up with something and it means so many things? I always come up with a lot of sh*t because it has to mean something to me.

"As I started to record, I don't know what it is. As my music belly gets bigger, as the date comes closer to delivering this baby, I figure it would be a little more fair to name it when it's done and I can see it. Sometimes I have in mind exactly what I'm doing and I have a clever name -- like Mama's Gun. I just knew I was gonna name my album Mama's Gun and I made the music to fit that title. In this case I'm creating as I go so I think it's only fitting and fair that I give this title when it comes."

She's totally joshing us, which isn't unlike Badu. Hopefully the thing that won't change is the album's release date, which is February 26, also Badu's own birthday. Fingers and toes crossed, she'll keep the promise she's made to herself and her hungry fans.