The Yawn-Inducing ‘Re-Thriller’ Tracklist is Revealed! 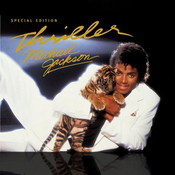 The tracklisting for Michael Jackson's Thriller 25th Anniversary Edition has been revealed, and before you get all into your feelings, Akon's nasal, soul-crushing re-imagining of "Wanna Be Startin' Something" is part of the package. Yay. Also on board are Kanye West and Will.I.Am, which indicates that MJ took a look at the Billboard charts and decided that if he was going to go "typical", then he would get some guys with at least a little creative integrity. Way to go. We're more interested in the outtakes, "Carousel" and "Someone in the Dark", which sound like odd foreshadowings to some Neverland Ranch funny business. [Billboard]