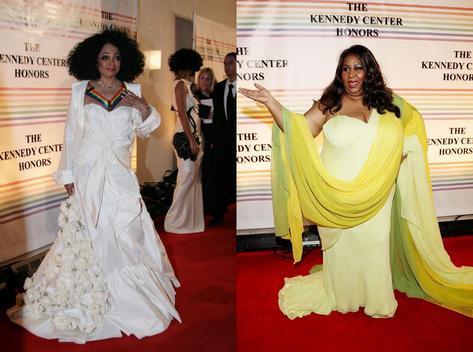 Last night the 30th Annual Kennedy Center Honors went down in Washington, D.C., and a who's who in politics and the entertainment industry was on hand for the gala event. But the real story of the night was just what in the world were honoree Diana Ross and attendee Aretha Franklin wearing? At SoulBounce we always pay respect to our elders in soul, but someone needs to explain to me what's really going on here. Diana's white frock looks like a bride gone bad with everything the dress has going on, and Aretha is rocking her requisite cleavage and layers upon layers of cloth that has me suddenly craving a lemon meringue pie. But as quiet is kept, I'm gonna have to give Aretha the edge here in this Soul Fashioned Face-Off. The dress fits her curves nicely, the colors complement her skin tone, and if Halle Berry wore that same outfit she'd be on everyone's best dressed list. Score one for Team Chunk.

You'll be able to see The Boss and Re-Re in all their gowns and glory when the Kennedy Center Honors gala is broadcast on CBS on December 26th at 9 PM EST.