So What Was Von Pea Thinking with ‘American Angster’? 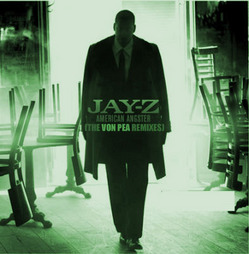 We haven't talked anything Hova-related here in a while, mainly because I placed an embargo on all American Gangster coverage in order to re-focus on our soul vocalists. But when we received Von Pea's American Angster remix album in our inbox, I just couldn't resist.

The American Gangster Acapellas dropped December 4th, Jay-Z's born-day, and DJs went nuts. Kevin Nottingham has been archiving all of the different versions and cites Von Pea's as one of the best. We recently highlighted Pea's group Tanya Morgan in our video roundup and Your SoulBounce Founder is a fan of the Grand Vonye tape. Simply put, to receive American Angster via Pea's personal delivery was kinda boss.

Now let's get down to the nitty.

"I was sitting around feeling antsy when I got off of tour in November...and my boy Scott Free hit me up like "Yo Von! The American Gangster accapellas are dropping!!!!!"

"I said to myself "Who cares? HIP HOP IS WACK!" and I was on the monthly "I hate rap" anxiety attack I always have. I needed something to take my mind off of that so I said "F*ck it let's get it...I'll do the damn Jay-Z remixes."

"I started about 7 of the beats that night. Notice i said started! I'm not on that "I did this in 15 minutes" sh*t. The next 2 weeks I'd do the others, and work on the first 7 more. December 7th rolled around and I was finished." --Von Pea

So let's break some of these joints down, a compare and contrast of some selections from American Angster against the original Gangster versions. First up is "American Dreamin'". The original version had to grow on me and as soon as I began to appreciate the atmospheric Marvin Gaye sample, along comes Pea's version, which is just as soulful but totally not a beat Jay-Z would ever use. It offers a little more head-nod value and is vaguely a bit more R&B-leaning. If I had to choose between both, I couldn't.

"[I] made "Hello Brooklyn" sound like an actual Brooklyn record..."

Can't argue with that. Pea instantly wins this one if only for replacing Lil Wayne's likely contribution with his own, which stands heads and shoulders above the former's. Sorry Weezy fans! Von Pea made this track bearable.

Next up is "No Hook", which is my favorite track off of the entire Angster joint. Just in terms of quality. If I had to contextualize it, it's a little more Blueprint than the original, and anyone that knows me is aware of how partial I am to The Blueprint.

"Blue Magic" and "Hello Brooklyn 3.0" has been peoples' favorites so far, which tells me I don't really know what people like, because both of those almost got cut because I thought they were boring.


I downloaded other American Gangster remix projects but promptly deleted them on the first listen. Many of the others, while fun, lacked the approach and attention to detail taken here. Von Pea manages to elevate these tracks from mere remixes and starts at square one, like Jay was right there in the studio.