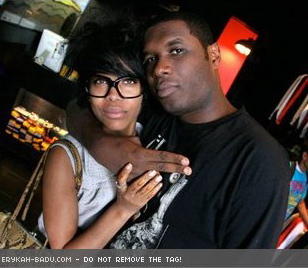 The web has been abuzz for quite some time with quiet releases from the newest darling of hip hop, Jay Electronica, who's been linked romantically to Ms. Queen of SoulBounce, Erykah Badu. Signed to Ms. Badu's label Control FreaQ Records since its inception, is it any wonder that Electronica is rollin' with E-Boogie? I mean, this chick has been with some of the most talented names in hip hop since day one. Lest we forget that platinum wig-wearing Andre 3000 or the crochet madness that she imparted onto Common. While I would love to wax poetic on what Jay's next fashion debacle will be, this must take a backseat to the fact that both music powerhouses have new joints with none other than the prolific, multi-instrumental, and always original, Madlib.

To start, Erykah's track is just purely awesome. While some have been absolutely loving "Honey" (I'm not one of them), "The Healer" sounds like it was played on a harpsichord with Hare Krishnas playing finger bells in the background, all while she shouts out J Dilla and Rastafari. It's a bit far out, and it totally works. Don't expect airplay with this one, but expect the blogsphere to explode over its powerful simplicity.
Jay Electronica's track with Madlib is much different but equally promising. It's on this track that you can truly appreciate Madlib's knowledge of several instruments as violins provide the cohesion for this track all while chanting voices rise up to meet the strings in a crescendo. Meanwhile Jay spits "I'll guide you in the ways of The Force," and you can't help but totally believe him. It is truly eargasmic, although at just over 2 1/2 minutes, leaves you wanting more.
All this is making me somehow feel that Erykah's previous collabos with her then-current loves Dre and Com Sense ("Other Side of The Game" and "Love of My Life," respectively) will pale in comparison to what she's got in store with Mr. Jay.
Can't wait.