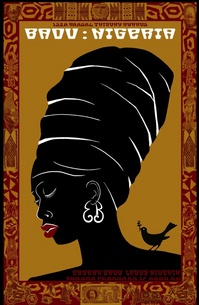 Erykah Badu has been kicking it hard in warmer climes, such as Israel where she recently performed in Tel Aviv in promotion of her forthcoming album New AmErykah. This Sunday's concert in Lagos, Nigeria will likely be just as stirring as her concert in Tel Aviv a couple of weeks ago, and has yet another slick poster to promote the show. This poster, though not done by EMEK, the artist who has also designed New AmErykah's cover as well as the Tel Aviv concert poster, features a Ms. Badu of ages past with her then-trademark headwrap. Glad to see Erykah's interested in presenting the public a total package that is consistent with the meticulous way she has attempted to present her own self since she debuted almost twelve years ago.

TAGS:  emek, erykah badu
Previous: Whose ‘Angel’ Has Wings? Anita Baker’s Or Chaka Khan’s? Next: Now You Can Look Like Someone That Picks His Nose On Camera And Doesn’t Vote!