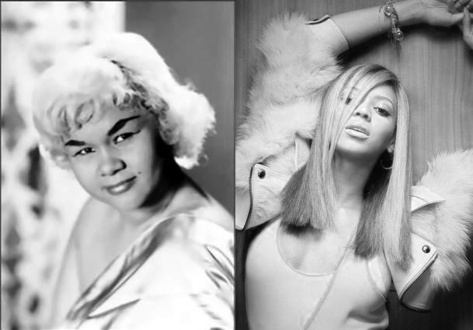 A few weeks ago a nasty rumor was floating around that Beyoncé had snagged the role of Etta James in an upcoming feature film about Chess Records. We laughed it off as a simple attempt to garner some buzz for the flick starring Adrien Brody, Jeffrey Wright and Cedric the Entertainer. Well, lo and behold that rumor is now fact and not only will Miss Knowles be starring in Cadillac Records, she will also co-executive produce the movie and sing four songs for the soundtrack. All I know is that she better put a hurtin' on James' classic "At Last" or heads will roll.

But here are some reasons why this might actually work:

OK, that's all I got, folks. I'm gonna put this one in the "wait and see" category. Beyoncé may actually dig deep inside and pull this one off. At least now she will get to embrace her inner big girl and fatten up for the role of the plus-sized singer. Popeye's here she comes!


TAGS:  beyoncé, cadillac records, etta james
Previous: Jill Scott Is ‘The Real Thing’ On Tour Next: Name That Beat: A Day Late But Always On Time