What Does Erykah Mean By ‘Savior’s Day’? 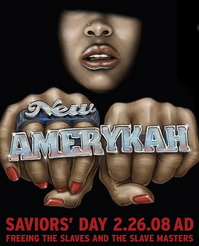 Today, February 26th, is not only Erykah Badu's 37th birthday, which she is marking by releasing her fifth album unto the masses, but today is also Savior's Day. Judging from this advertisement for New AmErykah, Ms. Badu would like for more of her fans to know about this day as well. Savior's Day is not some figment of Erykah's imagination, and it not related to Juneteenth or New Year's Day (the actual day when slaves were declared free in 1863), despite her declaring that on this day slaves and slavemasters will be free.

Savior's Day is the annual holiday celebrated by members of the Nation of Islam, as today is the birthday of Wallace Fard Muhammad, the founder of the Nation of Islam. Until the death of Elijah Muhammad, Wallace Fard Muhammad's successor, in 1975, Savior's Day was held annually in Chicago. Upon Elijah Muhammad's death, his son W. Deen Muhammad was named as his successor. W. Deen Muhammad, who had been raised as a Sunni Muslim, disbanded the NOI until it was reformed under a new spiritual leader who leads to this day, Louis Farrakhan. Interestingly enough, many believed that Muhammad Ali would be named as leader of the NOI if Farrakhan was not named as Elijah Muhammad's successor in 1975.
I'm not quite sure if Erykah is a Muslim within the NOI or if she just finds some truth within its tenets. Either way, it's a nice gesture by Erykah to end Black History Month off right, both by celebrating her new release and also calling attention to this oft-overlooked holiday.
This year, the Savior's Day celebration is again in Chicago. Video of Farrakhan delivering the keynote speech can be seen here.