Erykah Badu Wants You To Remix Her ‘Real Thang’ 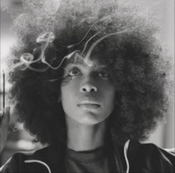 Erykah Badu
sure does love her stans. Whether it be personally answering their message board posts, posing with them for pictures, or staying up late at night to perform her new material from New Amerykah Part One, Erykah has much love for those who love her. And if you happen to be a fan who knows a thing or two about production, then this news is for you: Erykah has laid down some vocals for "Real Thang," a song not featured on New Amerykah, for the chance for the winning producer with the freshest beats to have the remixed song appear on Okayplayer, a Stanton DJ gear package, and other goodies. Contest ends April 30th, so get your dopest beats ready! Contest info can be found here.