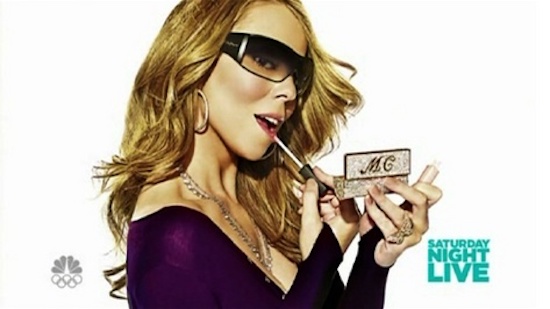 Mariah Carey graced disgraced the stage of Saturday Night Live this past weekend in what can only be described as a master class in what not to do. After all of the chatter about Mariah replacing Janet Jackson (!) in her first appearance on the late-night sketch comedy show in over 10 years (!) anticipation was heightened for Mimi to do the damn thing on SNL. Well, I'd like to request a refund of my time for watching that pre-Easter H.A.M.

To put it nicely, Mariah sucked. Not only was she lip-syncing, but she was lip-syncing and sounded terrible. The hell? Artists typically re-record "live" versions of songs for use in performances to throw people off of their lip-syncing trail. But to re-record the song and phone in the vocals is another matter. Furthermore, the whole lip-syncing thing only works to throw peeps off when your lips match up with the words, Mimikins.

But lip malfunctions aside, the songs she sang are Just. Not. Good. For an artist of Mariah's stature, this material is beneath her. The lyrics to "Touch My Body" and "Migrate" were alternately laughable and cringe-inducing. And, yeah, she's done collabos with a who's who of rappers before, but T-Pain? Come on. Was Lil Wayne too busy sippin' on some sizzurp? But back to Testicular Pain, can his 15 minutes please end soon? We need another flavor of the month producer/guest artist/ugly mofo STAT.

And poor Trey Lorenz. Can we talk about him for a second? He's been holding it down as one of Mariah's background singers since forever, and he's still there. But now he's reduced to oversinging his parts and wasting his talent harmonizing "YouuuTuuube." And Jesus wept.

In case you missed Mariah and want to subject yourself to her ear pollution, then peep her performances below.

In the event that Da Man snatches the videos offline, props to Lowkey from You Heard That New for uploading the "Migrate" live audio. Thanks, I think. According to him, the studio version of this song is gonna "OFFICIALLY shut sh-- down" when it drops, but I don't believe him. He needs more people.

Wack. If this is the best that Mariah can do, then I don't think that E=MC2 will be finding its way into my CD collection. Instead, I'll break out her first few discs and remember the Mariah who had some class before she grew up into a chickenhead.