The Roots Hoodwink Fans For A Master Plan

I will admit it. They got me. They may have gotten you, too. I was primed and ready to fight when I saw the video for The Roots' "Birthday Girl." I was mainly so upset because I thought The Roots had finally sold out and given in to the demographic that wasn't with them from the very beginning. As a former "backpacker," I was there in the wrecka sto' when Organix came out. I was the one bumpin' Do You Want More?!!!??! from my DJ headphones on the A train. I was also the one who saw them opening up for Erykah Badu in 1997, when the notion of headlining a tour would have sounded ridiculous to any concert promoter. It was because their fan base hadn't even approached the Gen Y demographic. Then came "The Seed 2.0" with Cody Chesnutt. Then suddenly I noticed my classmates who were not into hip hop began telling me that they had "discovered" a new group called The Roots and how "awe-sum" they were. I corrected them and told them The Roots were not new, and had been in the game for a minute. And despite my knowing that The Roots had hit the big time, I was happy that they had become mainstream so they could get some monetary compensation for all their artistic talent. That is until this "Birthday Girl" video surfaced.

I seethed. I looked up towards the sky in amazement, for an answer from the Most High to please, please help me to understand this foolishness. Then came the album cover art.

I was shocked. That is, until I was reminded by a certain frequent commenter where the inspiration for the cover art came from. 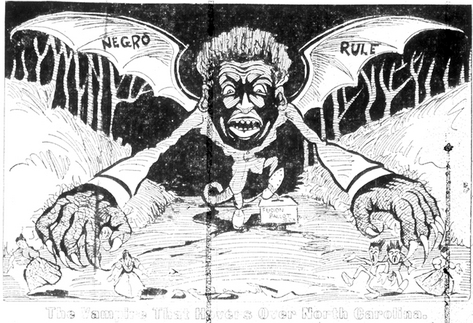 "The Vampire That Hovers Over North Carolina" Source
Then it dawned on me.
Oh. My. God.
The Roots are getting political with it. Again. Consider the cover art for some of two of their previous albums, Things Fall Apart and Game Theory.

Political, no?
Peep the tracklisting and notice that the pop-punk-rock influenced "Birthday Girl" is the only song of its kind on the album, and it is the very last track, not including the hidden ones. This means that the targets of this "Birthday Girl" hoodwink must, in theory at least, listen almost the entire album before getting to the sickly sweet ballad about statutory rape. They are releasing an opiate onto the (non hip-hop) masses ("Birthday Girl"), and they will gobble it up, just as they gobble up "The Hills," Us Weekly, or any other vapid, pop culture phenomenon. "Birthday Girl" will make these masses feel comfortable, and then...wham! The cover art will be released, their "manifesto," if you will, to let everyone know that Hip Hop, the Black Man, Barack Obama or whatever you may feel represents the Black Devil image hunting for slave owners on an open field, is here to stay and taking over in the '08.
Consider also the latest "leak" from Rising Down, the album's namesake track featuring backpacker faves Mos Def, Dice Raw, and Styles P. After the sheer ridiculousness which was the video for "Birthday Girl," (and by the way, why are grown men singing a song about statutory rape anyway) they knew they had to keep their core fans at bay. And when I say "core fans," I don't mean the ones who were late on The Roots bandwagon.
The Roots feat. Mos Def, Dice Raw, and Styles P: "Rising Down"


Much more pleasing, no?
I get it. Thank you, Roots. I will never doubt you again.