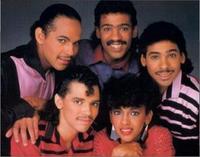 If there's one thing that is a staple in soul music, it's the singing family act. From the Jacksons to the Sylvers to the Emotions to the Pointer Sisters, the family that sings together can make some beautiful music. One such musical family that churned out classic R&B tunes and ruled the airwaves in the early to mid '80s were the DeBarge clan. Calling Grand Rapids, MI home, this family act consisted of brothers El, James, Mark and Randy and sister Bunny, five of the ten DeBarge siblings. Signed to Motown in 1978, it wasn't until their second album was released in 1982 that they found their musical stride and landed on the charts. By the time their third album, In A Special Way, came out in 1983 they were bonafide staples on Black radio with the second single from that set, the ballad "Love Me In A Special Way." The song opened with a piano riff and featured Stevie Wonder on a harmonica solo. However, it's El's voice that is the centerpiece of this classic. He shifted effortlessly from his normal tenor into a powerful falsetto that combined flawlessly with his siblings harmonizing in the background. The song has been covered in the last decade by teen group IMx and songstress Tamia, but neither remake can touch the beauty of the original.

Unfortunately, this family full of so much talent has had its fair share of personal issues and roadblocks that is well documented in the press, so we won't focus on that here. Instead, let's remember the good times when this family was nearing the peak of their success before they crossed over to pop music and eventually broke up. We still got a special love for you, DeBarge.

DeBarge: "Love Me In A Special Way"