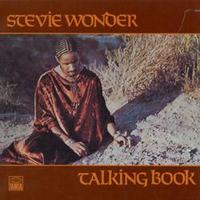 1972's "Superstition", from the Talking Book album, is one of the first songs written by Stevie Wonder that marked a change in the legendary music maker's sound -- from Motown pop to a more personal style.  Here is when we got to see "grown man" Stevie, tackling heavy subject matter and busting loose with the instrumentation.  Seriously, from the opening drum beat to the brass to the Arp and Moog synthesizer, it's like he's daring you not to dance.  It reached the top of Billboard's Hot 100, and is ranked #74 on Rolling Stone's list of the 500 Greatest Songs of All Time.

And while the song deals with superstitions, including falling ladders, broken looking glass, as well as the numbers seven and thirteen, the real message is in the chorus:

When you believe in things you don't understand/
You suffer/
Superstition ain't the way.

Ladies and gentlemen, Stevie Wonder!  Now, if you'll excuse me, it's time to groove.