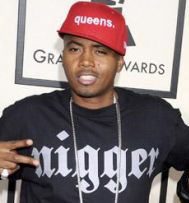 You knew it was coming. Nigger's release date has not been officially released, but this won't stop Nas from stirring up the pot to remind us all that the most uncomfortable album title of the year will be coming soon. "Be A Nigger Too" which uses the "Be A Pepper" hook from the Dr. Pepper soda ad campaign features production by Norweigan producers, Stargate. Think that was an uncomfortable recording session? Not to worry since Nas let's everyone know that "[Eminem] is my nigga-wigga-cracker friend" and that he wasn't at all upset that Eminem used the word "nigger" in his rhymes. And just for good measure, Nas also spits that his message is "To all my kike niggas, spic niggas, guniea niggas, chink niggas/ That's right/ Ya'll my niggas, too." Why? Because according to Nas "We all Black within." Is this message new? Surely not. The difference this time around is that, since Nas has always teetered the line between mainstream and underground, he now has the maturity to use his powers for good...and not for Diddy collabos. Know that this song will surely spark tons of debate, but the most important conversations may not take place on Fox News, but within our own homes.
Nas: "Be A Nigger Too"

TAGS:  diddy, eminem, nas, stargate
Previous: Jill Scott Nymphs It Up In ‘Allure’ Next: So What Stevie Wonder Songs Should Eric Roberson Cover?