Is It Already Time for ‘Something Else’ from Thicke? 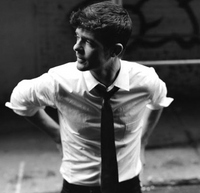 Love Robin Thicke like I love my luggage, but I can probably wait another year or so before he returns, unless his new stuff is so fantastic that it simply cannot be held back. According to SOHH, AOL and BET, this might certainly be the case with his third release Something Else, since all three outlets are reporting on a very intimate and satisfying preview session that went down last week. It could be the mood Robin set with the champagne and candles, or the music must really be boss.

Tracks that seemed to impress the invitees the most were the wistful "Dream World", "Sidestep" with its uptempo, old school vibe, and possible first single "Magic". No details on what tracks The Neptunes were involved in. if any. Something Else is supposed to drop in June. In the meantime he's also reportedly working on Ashanti's new album, and you can catch his piano cameo on Usher's "Love in This Club". I'm all for "getting that paper" but remember when he was just "Thicke"? When his music was edgier and he looked like Jesus? Ahh... good times. [H/T: theneptunes.org]


TAGS:  robin thicke
Previous: Morning Soul: Dumps Like A Truck Next: When Gang Starr Let Everybody Know Their ‘Steez’