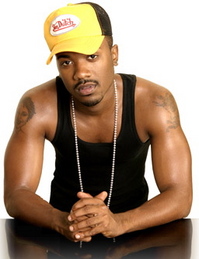 Ray J has been having a good past couple of years. Not only have we been bombarded with his likeness on the sex tape he made with fellow struggling-to-stay-relevant celebutante Kim Kardashian, he dated Lil' Kim and Whitney, and also released a new album this week. Whew! What's an afterthought second only to your more famous and talented sister Brandy to do? That's right, you guessed it! Talk dirt about an age-old rumor that may or may not be true involving Tupac and Faith Evans "knowledge" of each other:

Really, Ray J? And this is relevant because, why again? Because the link between Diddy and Biggie and their role in the Quad Studios robbery attempt on Tupac was debunked? No? Then why? Oh yes, that's right. Because you are in the fight of your life to remain relevant in the eyes of the public so that Brandy is mentioned in reference to you. I swear that sibling rivalry kills me.