At Least They Can’t Blame Jay-Z 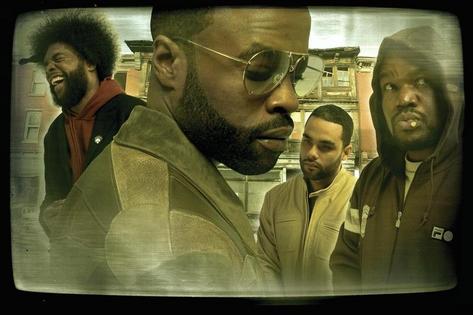 Why are The Roots even on Def Jam in the first place? L.A. Reid doesn't know what the hell is going on with an act signed to his label. Well, maybe just Mariah. SOHH breaks down ?uestlove's comments to Billboard about their tenure at the label, and it comes as no surprise what we learn.

"He has no idea that 'Birthday Girl' isn't even on the album," Thompson told Billboard. "They don't know we shot the 'Rising Down' video. They just know they approved an (electronic press kit) budget."

Wait. You mean the same guy that did this? ?uest goes on to say "If someone asked me, 'Do you want to release
two albums and sell over 2 million copies, or do you want a 20-year
career but none of your records will sell over 500,000 units?,' that's
a tough question. But, looking back, I wouldn't change a thing."

Yeah, okay. That's one way of looking at it. If The Roots constantly went double platinum we'd probably be sick of all their imitators by now; no one wants to bite anyone that hasn't moved a million units. But you (the reader) can help by legally purchasing the album today and showing the industry vampires that acts like this are viable. Oh, and apologies for us always using these shots featuring Leonard Hubbard. Those pics are just too dope to let go of.

The Roots Vs. Def Jam, ''As Each Album Goes By, The Risk Of Annihilation Becomes Closer'' [SOHH]