#57: The Isley Brothers ‘Footsteps in the Dark’ 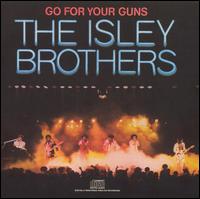 There's a reason this song was straight jacked by Ice Cube with no variation. Although "Footsteps In The Dark" was a groove meant initially for Quiet Storm sets, there's something about the mood it creates that causes heads to nod involuntarily. The pre-"Mr. Biggs" Ron Isley would settle instead for posing slightly metaphorical questions in the face of his lover's possible indiscretions rather than committing an act of violence. Still a player in those days, his gentle falsetto would attempt to goad her into answering: Is this meant to be? Is there anything left for us? What else is out there for you?

Why are you doing this?

This is a signature track from the brothers Isley, featured on nearly every one of their Best-Of compilations. The track pre-dates me by about three years, and it's hard to believe it didn't chart as well as it should've when Go For Your Guns was released. The vocal delivery is pleading and beautiful, the music itself laid-back and slightly funky, as most of the Isley's offerings were. But it's the words--mature, slightly haunting and direct--that beg another question:

Why does a song about cheating nowadays have to be so crass?

The Isley Brothers: "Footsteps in the Dark"