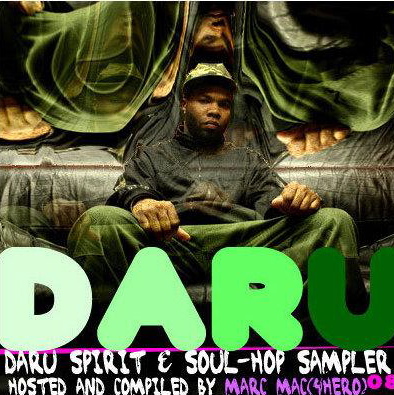 Michigan-born drummer Daru lists his musical idols much as many other producers would had they grown up in the '80s and '90s: Marley Marl, Erick Sermon, RZA, Pete Rock, and DJ Premier. But it may be his musical training that helps to set him apart from so many clogging your eardrums with their simplistic and uninspired sound. Smart enough to establish Rusic Productions early on, Daru's percussion training translates into him being able to chop beats in ways those untrained might not be able to. Daru's latest work can be heard on the Daru Spirit & Soul-Hop Sampler, which is hosted by one of the premier producers of soul house, Marc Mac of 4Hero. There's a wicked remix of Fugees' "Ready Or Not," as well as his use of the Premier-produced Gang Starr classic "Ex Girl To Next Girl" on "So Good" featuring Sweden's latest soul export, Kissey Asplund. The sampler is definitely worth a listen as well as Daru being someone to keep in your mental rolodex of artists to watch.