Discussing K’Naan’s ‘If Rap Gets Jealous’ 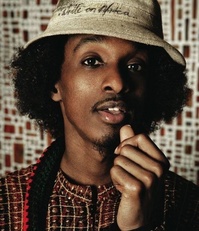 The name K'Naan may not be familiar to most, but that may change when the Somalian artist by way of Ontario, Canada releases his US debut, The Dusty Foot Philosopher Deluxe Edition, this June. His music has been described as borrowing "from the protest songs of Bob Marley, the hip-hop lyricism of Mos Def, and the storytelling traditions of Somalia," and he's received praise from Damien Marley and is a Juno Award winner. Not bad at all, but what did Butta and ill Mami think of his single "If Rap Gets Jealous"? Did they love it or want to leave it alone? Listen to the track, then read on below.

K'Naan: "If Rap Gets Jealous"

Butta: OK, so this is some cat named K'Naan.

Butta: Ah, that explains some things. Well, the track starts off innocent enough.

Butta: I like the guitar, too. Can't say the same for his voice, though. Yikes! He dropped the f-bomb. My virgin ears!

ill Mami: I know. Wasn't expecting that. "You're likely to get shot at birth." Wow.

ill Mami: This chorus is kind of annoying. I miss the guitar. Thank God, it's back.

Butta: Right! The rocking out on the chorus is an acquired taste.

ill Mami: This song is likely like Kryptonite to 50 Cent or Jim Jones. LOL

Butta: I could do without the screaming myself. It's distracting.

ill Mami: Now how is rap going to get jeaous?

Butta: I guess he was saying that rap is going to get jealous of him rocking out? But that's not going to stop him? Or something to that effect. Help me make sense of this. LOL

ill Mami: In his defense, I have heard his earlier stuff and a video on VH1 Soul that I kind of liked. "Soobax" I think. He has performed with Damian Marley and Mos Def before.

Butta: Oh really? This was my first time hearing anything of his. Not exactly my cup of oolong, but I'd be interested to hear something else. With less screaming.

Butta: The verses were chill, but I wanted to find a mosh pit when the chorus came on...and run in the other direction.

ill Mami: I'm sure that mosh pit you're wishing for smells of old beer and patchouli.

ill Mami: I really want to like this cat because he's like the best of everything I like: consciousness, hip hop, Africa, rock music, but it really fell short.

Butta: I wanted to like it, too, but something was missing.

ill Mami: He did a track called "Kicked Pushed" with the Lupe beat, and it was STILL lacking. Dayum! I might have to let him go.

ill Mami: Haha! Don't get me started on TP!

ill Mami: Just because K'Naan's from a war-torn land, a good emcee that does not make.

ill Mami: Hee hee! So the consensus is that rap is not jealous at all, methinks.

Butta: I second that emotion.

Butta: You're such a wordsmith. Well, I guess we can put this one to bed.

Butta: On that note, let me go listen to some real hip-hop now.