Femcees Getting Their Just Due from Just Blaze 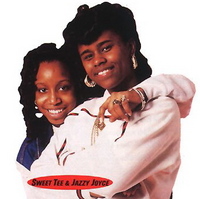 If you've been watching Miss Rap Supreme, then you're likely lamenting that next week will be the season finale. It seems as though we were only just starting to get to know Byata, Rece Steele, Miss Cherry, and Chiba and their all of the unnecessary drama when they were not trying to write a hot 16-bar verse. Just Blaze, hip hop producer extraordinaire who also produced one of my favorite Talib Kweli tracks, offered his services this past week to their rapstresses-in-waiting. As is to be expected, after the episode aired, Just Blaze offered some of his favorite female emcees from all eras on his blog, while Elliot Wilson of ego trip and one of the creators of the show weighed in on his results.
The expected old schools mamis make the list, i.e. Latifah, Roxanne Shanté, Rah Digga, Bahamadia, and Sweet Tee. The oversexualized mamis of the '90's crept up in there, too: Foxy Brown, Lil Kim, Amil, and Eve. It was noce to see Just Blaze show some love to Ladybug Mecca from Digable Planets, as well as Jean Grae. While Jean didn't make it onto our list of our current favorite hip hop artists due to her no longer being in the rap game, Just made sure to add that Jean has "FGOAT potential." We're hoping Jean just needs a respite from the hip hop world and doesn't go out like Lauryn Hill, another honorable mentionee on Blaze's list. I know that the road is over for Lauryn, but damn ma, you really did kill it on the "Sweetest Thing (Remix)." And by the way, we're pouring out a likkle liquor for John Forté's unfortunate incarceration at the beginning of his rise to hip hop stardom back in 2000. Cocaine and conscious hip hop do not mix, my friend.
While none of us will know the results of Miss Rap Supreme until next week, our fingers are crossed for any female emcee to bring it lyrically some time in the near future.
"Ladies First aka Soundclash Rap" [MTD2]
[H/T: OKP]