In Defense of Usher 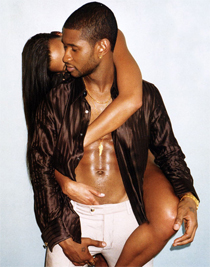 As many of you are aware, Usher went on a rant this week on TRL, addressing all the trash people have talked about his wife. I'll be the first to say that I don't feel heaps of sympathy for people as blessed as he is, but, in a time when you have countless Hip Hop and R&B stars going to court for child support, being brought up on drugs and weapons charges, sexing minors, etcetera, etcetera, is getting married and becoming a dad the worst thing this brother could've done? Really? This, of course, all stems from the fact that the tween set is refusing to let this man turn 30, to which I say, "You'll live."

Full disclosure: I was a big Usher fan back in the day. His first album was sorely underrated and featured the best writing and production team of any Usher album to date--Al B. Sure, Faith Evans, DeVante, Chucky Thompson and even Sean "Puff Daddy" Combs all created the sound of my youth. Since then, he's been fortunate to become a reigning figure in R&B/Pop royalty, laying the smackdown on the charts and working his behind off. Even when other LaFace acts like TLC and Toni Braxton were the victims of bad accounting, he persevered. His personal and professional record is, for the most part, squeaky clean. I'd go off, too.


TAGS:  usher
Previous: Jimmy McGriff (1936-2008) Next: Femcees Getting Their Just Due from Just Blaze