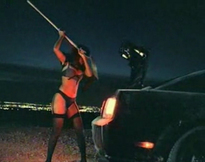 I loves Kanye West, Lord knows I do. I've even defended his mania on occasion. But there are moments like this when I don't quite mind disowning the brother. Entertainment Weekly had the gumption to rate the Seattle stop of his Glow in the Dark tour a B+ and Kanye raised holy Hell on his blog, responding "What's a B+ mean? I'm an extremist. It's either pass or fail! A+ or F-! You know what, f*ck you and the whole f*cking staff!!!"

Wow. He reminds me of those renegade commenters we get on this blog every once in a blue moon, that fail to see the overall props or humor in an item and choose to isolate one remark that isn't 100% affirmative in order to launch into an immature, misguided tirade. I mean seriously, if I, for example, like all but one song on your album, does that make me hater? For real? Also, doesn't the fact that he's so upset about what EW has to say means he puts too much stock in them? Otherwise, why would he give a damn? Note to Kanye: Find the cure for AIDS, find Bin Laden, and turn water into wine. Then we'll genuflect.

This dude truly hasn't aged past six. If there were any questions about who's really writing his blog, I guess we have our answer now. To his credit, he kind of apologized, but it was so disingenuous it doesn't quite undo the damage. Uncensored intel after the bounce.

Yo,
anybody that's not a fan; don't come to my show. For what?! To try and
throw ya'll two cents in? Ya'll rated my album shitty and now ya'll
come to the show and give it a B+. What's a B+ mean? I'm an extremist.
It's either pass or fail! A+ or F-! You know what, fuck you and the
whole fucking staff!!! I know I shouldn't dignify this with a comment,
but the reviewer threw a jab at all the artists. I just wanna know when
was the last time you enjoyed yourself. If you can't have fun and lose
yourself at this tour it's a good chance you're a very miserable
person. I actually feel sorry for you guys. Your job forces you to not
have fun anymore. Grab a drink, holla at some nice girls, and party
bitch!! You don't know shit about passion and art. You'll never gain
credibility at this rate. You're fucking trash! I make art. You can't
rate this. I'm a real person. I'm not a pop star. I don't care about
anything but making great art. Never come 2 one of my shows ever again,
you're not invited and if you see me...BOW!! This is not pop, it's pop
art!