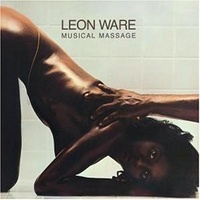 Last night on PBS, "Marvin Gaye: What's Going On" aired as part of its American Masters series. The documentary focused on Marvin's life, especially his emergence as a politically conscious soul singer. Gaye, a multi-instrumentalist and composer, often arranged and produced all of his own music, but there was a figure the documentary briefly focused on that is of particular interest. Leon Ware, a singer/songwriter who has written hits for the Isley Brothers, Ike and Tina Turner, and The Jackson 5, also is responsible for Marvin's "I Want You." Persuaded by Berry Gordy to give songs he intended for himself to Marvin in exchange for producing him, Leon allowed Marvin to eventually make this song as closely associated with Marvin as "What's Going On." Also on Marvin's I Want You album are "Come Live With Me Angel" and "I Wanna Be Where You Are." Below are the Leon Ware originals from his album Musical Massage.
Leon Ware feat. Minnie Ripperton: "Comfort AKA (Come Live With Me, Angel)"

Leon Ware: "I Wanna Be Where You Are"