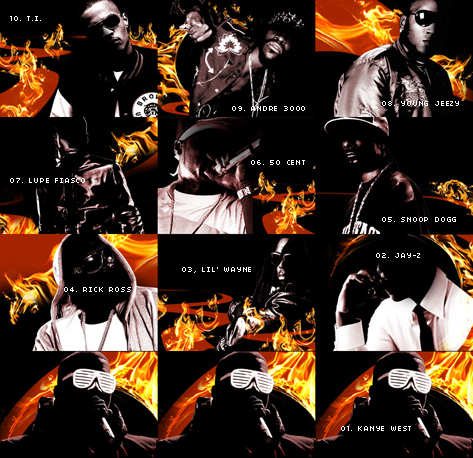 Well, that was pretty anti-climactic, wasn't it?

When it comes to things like rankings, we can engage in pointed, light-hearted discussion, we can poke fun, we can take it seriously, or we can take it personally.
The passion with which Hip Hop heads discuss these matters points to
several things, mostly a determination to preserve what we hold dear.
Other times, it becomes a certified whine-fest and we aren't gonna do
that here.

That said, aren't you glad Soulja Boy didn't make it? He could've. This is MTV, after all.

10: T.I. (2007: #2)
The Hip Hop Braintrust goes to great lengths to qualify the reasons why T.I. slipped from last year's ranking of #2 to #10, chiefly the legal problems that prevented him to properly promote his last project. Then why is he on the list at all? Well, T.I.'s got skills, although he's far less interesting than he was during his "Rubberband Man" and "Bring Em Out" days. In short, he's on the list because there's only a handful of rappers in the mainstream right now that are worth a damn, and he's one of them.

9: Andre 3000 (2007: #4)
Again, I'm mystified by the inclusion of Andre! "No album, no single, only two guest appearances -- Andre did even less
this year than he did in 2007. There's not even a handful of verses to
judge him on. Should the Hip-Hop Brain Trust members be found guilty of
treason for giving Andre a slot in the top 10 despite minimum output?"


Andre is definitely dope overall, but this is the wrong list for him to appear on based on the countdown's logic. I think they added him so they wouldn't look stupid. Hell, they might as well put Biggie on there if it's like that.

7: Lupe Fiasco
Everyone far and wide pretty much agrees on Lulu's skill. The Braintrust acknowledges leaving him out of last year's list and his subsequent response. Personally, I've never listened to a Lupe Fiasco song more than a handful of times other than "The Cool." But having him on the list is a good look.

6: 50 Cent (2007: #8)
Looks like ol' Curtis came up in the rankings but still couldn't crack the Top 5, poor thing. "'I Get Money,' 'Ayo Technology' and 'I'll Still Kill' maintained his credibility as a musical commodity to close out the year." Whatever. People are gradually beginning to get weary of this cat, perhaps even to the point of questioning why they liked him in the first place. FAIL.

5: Snoop Dogg
We all love Snoop, but don't get this twisted. He's on here because he dropped an album, which, at a minimum, qualifies him more a couple of folks that ranked below him. Oh, and he also had a reality show. Overall, Snoop is never not interesting. I can live with this.

4: Rick Ross
He's just some cat that got lucky by out-selling Snoop on the first week. Who the hell is Rick Ross?

3: Lil' Wayne (2007: #1)
Ok, fine. I still don't get the Weezy fascination, but everyone else does. Not my cup of tea, but apparently there's something to this cat.

2: Jay-Z (2007: #7)
He's only on here because he married Beyonce. Kidding! Or maybe not, since this introductory paragraph devotes a lot of copy to the nuptials. But mostly, he saved his own hide by releasing American Gangster, an album that got people excited about him again after the flashy ego-fest that was Kingdom Come. Also, Jay-Z is one of the few in the mainstream I can listen to without feeling guilty or disgusted afterwards. Props deserved.

1: Kanye West (2007: #5)
Although Kanye's existence is an argument for why grown-ass men can also star in an episode of My Super Sweet 16, and he's failed to exhibit any humility in light of tragedy, he's got to be one of the hardest working cats out right now, and his output shows it. Skills? Got 'em. Showmanship? Got it. Attention to detail? In spades. Newsworthy-ness? Yes, but to be damned. Congratulations!

Of course, I wouldn't leave you without posting a truly amusing response to this list. Of note, dude has clearly forgotten what website he's on:

This list is Trash,Trash,Trash! that panel is SUSPECT wtf Rick ross. young jezzy shoulda never made the list and what no common are you serious ,and to debate whether lil wayne is hotter than jay-z and kanye west just goes to show you how bad the game has gotten.The name of the show should be changed From the hottest MC to Popularity Contest.The only good point is that they put kanye at #1 this is most certainly true...but next time get some real hip hop heads and not conformist.

So what are your thoughts, SoulBouncers? Is this list even worth the bullet? Because let me tell you something, I looked at it shrugged. Also, make your way over to Miss Info's spot for a thrilling discussion about why Soulja Boy should've made the list. Then, go wash your eyes out with soap before you come back here.