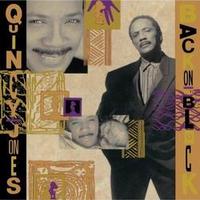 Growing up, I never understood what Quincy Jones did. It never made sense to me how he would release albums with his picture on the covers and name on the records when he sang nary a song. No one had ever explained his history to me nor told me what a producer does, so I was totally clueless. Believe it or not, it wasn't until 1989 that I became enlightened and fully realized this man's musical genius with the release of his album Back on the Block. Because only a genius would have thought to put Al B. Sure!, El DeBarge, James Ingram and Barry White together on the song "The Secret Garden."

What may have seemed like a motley crew on paper turned into a dream team on wax. The synergy between the four disparate voices was incredible. Each singer brought their own unique sound to the track and made it work. Not only did they sound good together, but the song itself was a grown and sexy affair before we started referring to things as "grown and sexy." "The Secret Garden" bridged the gap between musical generations and featured something for everyone. Al B. and El appealed to the younger set while James and Barry held it down for the more mature folks. Under Quincy's watchful eye and thanks to his golden ear, these artists were brought together to create one of the most passionate songs to ever hit the Quiet Storm. Co-written by Q, Rod Temperton, Siedah Garrett and El, this song was subtitled "Sweet Seduction Suite" for a reason. Put this track on at the right time, and the cakes were guaranteed to get moist. More than a few '90s babies owe their thanks to Quincy Jones and the fellas for their existence.