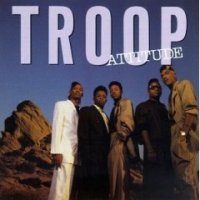 Confession time: I kinda like the Jordin Sparks/Chris Brown duet "No Air." (Come on. You can admit that you like it, too. It's cool. We're all friends.) It's just a good R&B song that happens to be written by Steve Russell. Who, you ask? Well, Steve is much better known as the lead singer of the late '80s R&B group TROOP (which stands for Total Respect Of Other People), who along with his jheri-curled partners in crime Allen McNeil, John Harreld, Rodney Benford, and Reggie Warren, gave us the R&B we grew up on, with "Mamacita," the remake of the Jackson 5's "All I Do Is Think of You," and their most popular song, as well as today's countdown entry, "Spread My Wings."

The track, from their 1990 sophomore platinum-certified effort Attitude, was written by Russell and produced by Chuckii Booker, and represented the group's first number one Billboard hit, spending two weeks atop the U.S. R&B charts. Oh, and as it turns out, Russell was just giving us a taste of his songwriting prowess with "Wings," as he's gone on to pen tracks for the likes of Aretha Franklin, Glenn Lewis, LSG and Monica as a member of the production team The Underdogs. It's with TROOP, however, that he got his start, and his words, combined with the high-octane choreography in the video, makes this track an R&B classic. Like "No Air." *dodging rotten tomatoes*