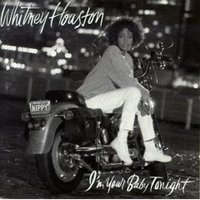 During the course of this countdown, we've already deemed Luther Vandross the King of the Remake. However, if we were to crown a Queen, then that honor would have to go to Whitney Houston. Whitney's been known to tackle a classic or two ("I Will Always Love You," "For the Love of You" and "I'm Every Woman," for example), but it was her take on an obscure song originally sung by Linda Clifford that was one of her greatest moments on wax. Released in 1991, "All the Man That I Need" was the second single from her third album, I'm Your Baby Tonight. Whitney's voice soared over a full orchestra and Kenny G.'s saxophone, and her passionate delivery of the lyrics led this song to top three Billboard charts. "All the Man That I Need" is a beautiful power ballad about kissing a few lames before finding that one true man who gives you more love than you can stand. Seeing how things turned out, it's laughable to think that Bobby Brown may have been Whitney's inspiration when she sang this song, but stranger things have happened. Although "All the Man That I Need" may have been written by Dean Pitchford and Michael Gore to celebrate an earthly being, Whitney took us to church with her vocal acrobatics. Her version was straight outta someone's gospel choir come Sunday morning. While we pray for Whitney to make her long-delayed comeback, we'll remember when this was all the Whitney that we needed.